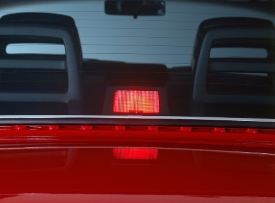 Whether the third brake light mandate worked as predicted is not entirely clear, given other factors affect the statistics – like the instance of drug-impaired or distracted driving.

Still, the consensus seems to be that the third-light mandate worked. As far back as 1995, an insurance institute study concluded that model year 1986 cars experienced 5 percent fewer rear-end collisions from 1986 through 1991 than would have been expected without the high-mounted lamp.

“Anything that makes you more visible is an improvement,” says Jennifer Stockburger, director of operations for Consumer Reports’ auto test center. “There’s no doubt that occupants are better protected than they were 30 years ago.”

Better vehicle designs and other safety technology have made cars safer than ever, with the pace of improvement very swift in recent years. Between 2009 and 2012, for example, the chances of dying in a car crash fell by a third, according to a 2015 study by the institute.

About two dozen auto makers have committed to making automatic emergency braking a standard feature by 2022 or sooner, with the goal of reducing the instance and severity of rear-end collisions even further.