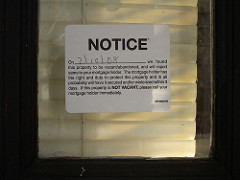 When a person mortgages a property and then fails to make the required mortgage payments, the lender may not take possession of the property until it has gone through foreclosure. This is the rule by Washington statute, specifically RCW 7.28.230(1). This statute essentially codified the “lien theory of mortgages” in Washington – meaning the mortgage is “nothing more than a lien upon the property,” as opposed to “a conveyance entitling the mortgagee to possession.” W. Loan & Bldg. Co. v. Mifflin, 162 Wash. 33, 39, 297 P. 743 (1931).

Recently, in the case of Jordan v. Nationstar Mortgage, LLC, No. 92081-8 (July 7, 2016), the Washington State Supreme Court addressed whether a borrower and lender could circumvent this rule by entering into a contractual agreement before the borrower has defaulted (failed to pay), allowing the lender to enter, maintain, and secure the property before foreclosure has occurred. The Court answered: No.

In Jordan, the borrower (Jordan) bought a home secured by a Deed of Trust – which, for purposes of this case, is similar to a mortgage. The Deed of Trust contained certain “entry provisions,” which provided that, should the borrower default or abandon the property, the lender may take certain actions to enter, maintain, and secure the property, including changing the locks.

Jordan defaulted on her mortgage payments, after which Nationstar, on behalf of the lender, changed the locks on Jordan’s front door, leaving behind a lockbox with the key to the new locks and a notice that it was “secured against entry by unauthorized persons to prevent possible damage.” Upon finding the notice, Jordan contacted Nationstar and was provided access to the lockbox. She took all of her belongings and vacated the house the next day.

Jordan was not the only borrower to experience this kind of “lockout.” In fact, she represented a class of 3,600 Washington homeowners who were similarly locked out of their homes by Nationstar.

Moreover, the Court held that, under the lien theory statute, exercise of the entry provisions of the Deed of Trust qualified as the lender taking “possession” of the property. Nationstar’s re-keying of the property satisfied “the key element of possession: control.” It “had the effect of communicating to Jordan that Nationstar now controlled the property” and that “She could no longer access her home without going through Nationstar.” The entry provisions gave Nationstar possession of Jordan’s home, and as a result are in conflict with Washington law and unenforceable.

The Jordan Court also addressed a second question: Whether Washington’s receivership statutes separately prohibit the entry provisions in the Deed of Trust. These statutes provide for the judicial appointment of a third-party receiver to manage the property. On this issue, the Court also answered: No. The Court held that although a receiver might be appointed in the context of mortgaged real property, such an appointment was not required. Such a requirement would illogically interfere with the “efficient and inexpensive” nonjudicial foreclosure process offered by Deeds of Trust. However, this holding makes no difference in this case, as the entry provisions are still invalid under the lien theory statute.

This decision could significantly impact thousands of borrowers and mortgages throughout Washington. Many mortgages, if not all, provide lenders with some recourse should a borrower abandon their property or otherwise fail in its upkeep. These provisions are there to protect the secured property from losing value by falling into waste. With the Jordan decision, at least one form of recourse is no longer available to the lender – intervening directly by re-keying the property pursuant to pre-default contractual provisions.