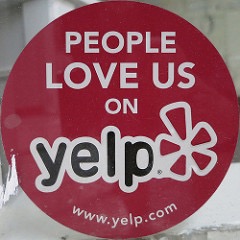 Hassell filed suit against a former client who was posting negative Yelp reviews about her practice. Hassell represented the former client for 25 days in a personal injury matter before withdrawing because of communication troubles and the client’s dissatisfaction with the service. After making repeated requests for the client to take down the reviews, the client refused and instead threatened to post more reviews and have another review posted by someone else as well. Soon after, the client created a fake identity and posted another negative review about Hassell. The reviews contained false accusations regarding Hassell’s services and skills as an attorney.

Yelp refused to comply with the court deadline, believing that the order violated Yelp’s Due Process and First Amendment rights. Yelp filed a motion to set aside and vacate the judgment and the motion was denied. The court reasoned that Yelp was aiding and abetting the ongoing violation of the injunction by explicitly recommending one of the defendant’s reviews and refusing to take down the other reviews. Yelp appealed to the California Court of Appeals. The court ruled that even though Yelp was not a party to the defamation action brought by Hassell, injunctions can properly run against nonparties. Planned Parenthood Golden Gate v. Garibaldi, 107 Cal. App. 4th 345, 355, 132 Cal. Rptr. 2d 46, 54 (2003).

As to the protection of Yelp’s First Amendment right “to distribute the speech of others without an injunction,” the court held that in this context, the removal order did not treat Yelp as a publisher of the defendant’s speech, but rather as the administrator of the forum the defendant used to publish her defamatory reviews. Furthermore, the speech was already deemed to be unprotected and tortious and thus not protected under the First Amendment. However, the court did find that ordering Yelp to remove subsequent comments that the defendant may make (other than those already found to be defamatory) was an unconstitutional and overbroad prior restraint on speech. Although the order denying Yelp’s motion to vacate the judgment was affirmed, the case was remanded so that the trial court could narrow the terms of the removal order by limiting it to the specific defamatory statements that the court already ruled on.

This case serves as a reminder that both online consumer reviewers and the websites that host their content are subject to the laws of libel.